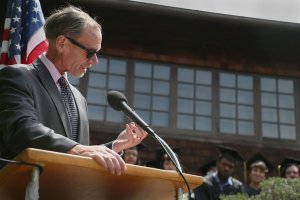 As someone who leads a campus marketing department at a major university, I bristle whenever someone emails or pops in my office saying something along the lines of “we have this event/new program/conference and need a poster.” I had a colleague say the other day – ‘I know you hate posters, but…’

It’s not that I hate posters. On a college campus, sometimes they can be a very effective part of an overall communication program. But all too often, time and effort and re-designing happens for a poster that will be ignored by hundreds of students who might be very interested in the material, but are buried with their face in their mobile device. Why aren’t we hitting them where they live – on their mobile devices via Twitter, email (yes, email) and other social media?

I’ll be presenting on content marketing again for Higher Ed Experts – details to come – watch my Twitter feed. I note that David Carr NYT media critic, who died last week, acknowledged the increasingly blurry lines between corporate journalism/content marketing/native advertising and “real” journalism. I was interested to learn he was teaching a journalism class and thought how lucky these students were to learn from a guy like him. I think his catch phrase, something we can all learn from, is something like “just keep typing until it turns into writing.”